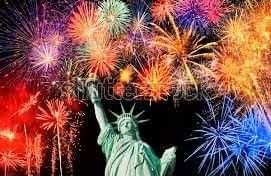 Happy 244th birthday to our great nation. While 244 is long in terms of human age, it’s relatively young for a country. We are an amazing country. We are a republic. A republic is a state in which supreme power is held by the people and their elected representatives, and which has an elected or nominated president rather than a monarch.

Our unusual form of government has no equal. Our expectation has been we elect someone who represents our ideas of how the government should govern us. We cast our votes, and see who won. In my lifetime, it appears the quality of candidates has changed dramatically, and often, people are elected who may not do the best job. Without getting political, I want us to remember no president is right all the time nor wrong all the time. It’s the luck of the draw sometimes. We have to hope for the best when our candidate doesn’t get elected. We perhaps can make our opinion heard more loudly in Congress or the Senate, where we elect someone from our own state for a two year (Congress) or four year (Senate) term to more closely represent what we choose for our futures. Either way, there is always the next election, and we have to put up with an opposing candidate now and then. It’s part of being a grownup citizen who has the privilege of voting in our great country. Let’s be civil with each other when we don’t agree when the other guy (or woman) gets elected. We owe that civility to each other as citizens of this great nation. Let’s not ruin our unity by bickering anymore. Please.

I heard this on Facebook this morning. Matthew McConaughey is really a pretty smart guy for an actor. Give him a listen here. We will always have work to do, as he says. There will always be someone or something we need to keep in check, aside from ourselves. But we can all work to keep ourselves where we need to be. We need to work together, whether it’s about COVID-19 or about social justice. Let’s breach the divide. Gather instead of scatter. We need to exchange intelligent ideas and proposals to cure what ails us. Reparations and tearing down statues does nothing in my opinion. It just makes one side more dug in with their opinions, and adds to the frustration of trying to find common ground.

With that said, has diversity gone so far where we honor this and that, and forget to honor what this country stands for? It does not stand for one group of citizens over another. We have equal rights, but now some groups have special favor. That is wrong. Have you ever studied the Constitution in school? I have to say I haven’t since high school. That’s my bad. You can pick up a copy at your Congressman’s office. Google it. Look it up at the library (my age is showing there!). Read it. Talk about it. Talk about the truths in it. Talk about the intent of it. Humans have just enough selfishness in every one of us, we’d love to have it favor us. Our group. Our Ethnicity. Our sex. Our sexual preference. Our religion. Our group of immigrants.

I’m wearing a mask from now on when I shop. It’s about the only place I go unless it’s to the VFW. I feel safe there, as the volunteers work very hard to keep the place clean and sanitized. I’m mad as heck, we had a new grandchild in January, and have not been able to go meet him in Colorado yet. Colorado has stopped their re-opening. My daughter feels it’s too risky yet for us to come visit. I understand the risk. I’m not going to be careless so when she feels it is safe, we can go out there. I could be obstinate and balk about the masks, but I’m choosing to endure them so I can have the pleasure of meeting little Cody Wyatt. I want this pandemic to end so I can hold this little guy before he’s 25! Choose to endure rather than complain about your rights being violated.

The book, Personality Isn’t Permanent has a lot of insight for me. It talks of the past, and we often want to change it. (Kind of like removing statues, etc.) We need to see where we’ve been in order to not repeat the behavior. We also need to leave the past alone and learn how to react to it differently. That’s on us. Those past indiscretions are long gone and over, and we are grateful they no longer exist. We see our past and do not want to repeat it. We think of how we once behaved as we learned from others, not thinking of what we wanted for our goal.

We may not recognize the person we once were. A person petrified of public speaking can learn to speak in front of a crowd. When I was in high school, I did not participate in Drama, Speech, Debate, or try out for the plays we had simply because I was painfully shy and could not speak in front of people. As Club Presidents, we had to appear before the Freshman Class and talk about our clubs, in case someone wanted to join. I’ll never forget it. It was awful.

I stepped up, my heart pounding in my ears, my hands and knees shaking from fright. I opened my mouth, and nothing came out. Nothing at all. I swallowed hard and tried to speak again. Nothing. It felt like twenty minutes, but after a couple more tries, I just walked away. My eyes filled with tears, and my face burned. I wish they had prepared those of us who couldn’t speak in front of people before they threw us to the wolves. I remembered that for a long time.

About twelve years later, I was taking classes from UNOs College of Continuing Education, and a required class was “Public Speaking.” I already changed personality wise and finally had the confidence to take the class. I did well. Then I joined Toastmasters. It was a group of business people who met over lunch downtown. People were from Union Pacific, State of Nebraska, The Courthouse, First National Bank, and me from ConAgra. It was the best thing I ever did.

Now, I’m hoping when my books are launched, I’ll be able to talk with different groups at bookstores, libraries, and anyone who may be interested. Your goals are the key for how your personality changes. Your personality is shaped by your purpose. At one time, my purpose was a stay at home mom. I lived and breathed that. Then it changed to that of a business woman. I became that woman during a time when women could be openly discriminated against. It appeared to some people I had no kids because they didn’t call me with trivial issues and I didn’t talk about them all the time. I didn’t have time, I had so much to learn! Things are not that harsh now. I was lucky to study programming and analysis, so I became a technical person. My pay was strictly based on performance and tech knowledge. I could compete and earn a good living. I’m grateful for that.

The best job is a retired Grandma! I’m rocking that every chance I get. I enjoy a lot of things, and writing is now at the top of the list, even ahead of quilting. I didn’t think I’d ever let that drop out of first place. I hope to have it off the back burner once I’m published. Thanks for spending time with me today. I appreciate it, and look forward to seeing you again tomorrow. Be safe. Wear a mask. Wash your hands. I’ll be doing that, too.