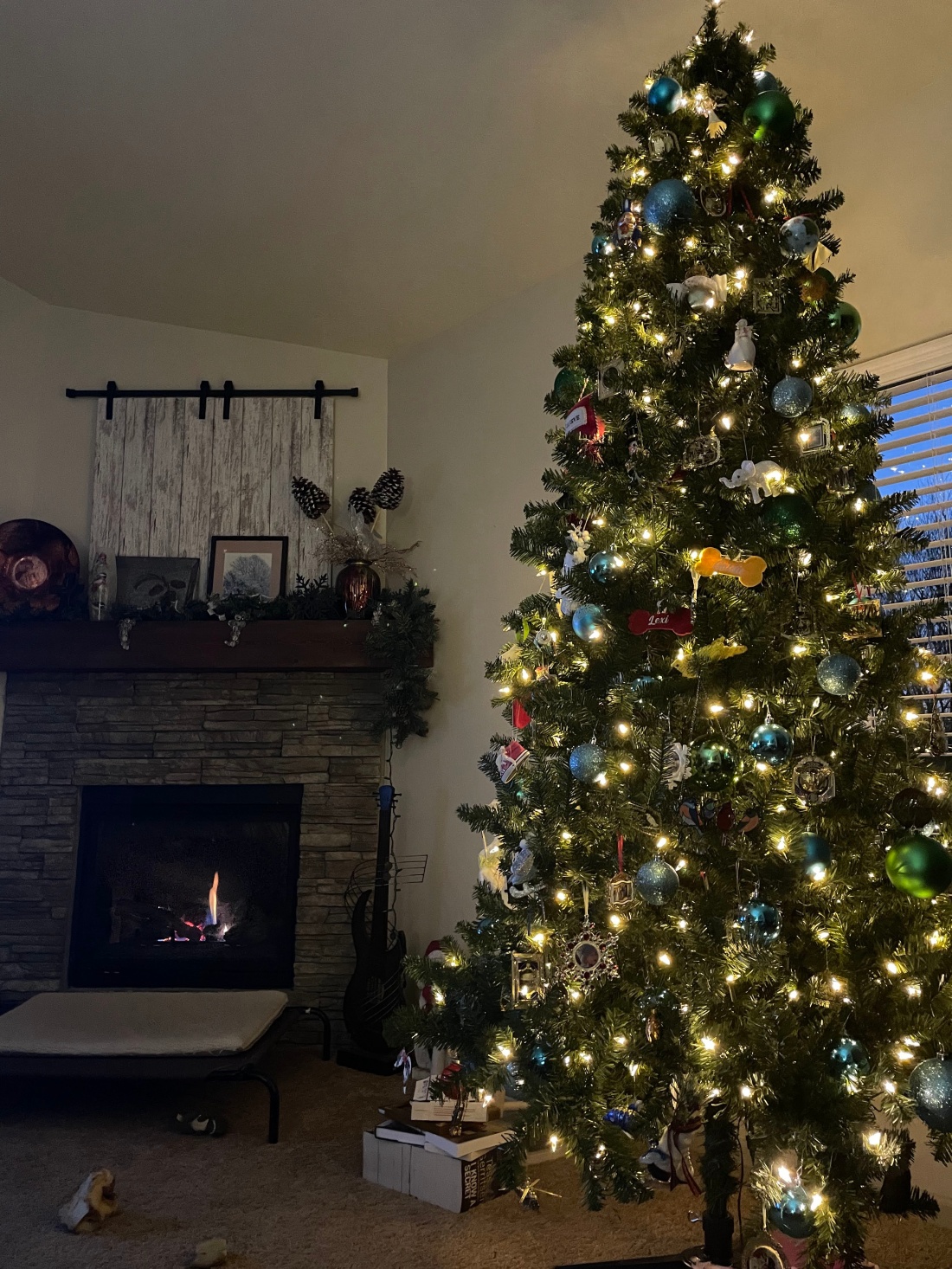 Still overcast at the Home Office in Gretna, Nebraska. Maybe that, not procrastination, is the reason I’ve left our Christmas tree up. The header photo is from this morning; I told the Babe I just love how it looks by the fire, with the dogs all napping and us just chilling’. It’s a part of life you cannot buy. You create that space with your family/friends/significant other, and it just feels so good, so right, so untouchable. It takes practice and trust to relax, let your hair down, relax your shoulders, and just be in the moments you are sharing. So grateful for our life.

I also have a planning meeting with the other officers of the Auxiliary at 1 p.m. The Babe is off doing bookwork and another Honor Guard Funeral this morning. I am so proud of The Babe, he is working a lot, but he’s a person who can’t retire and relax. He is using his need to be productive in a positive way. Yes, sometimes it can be frustrating, but it’s very rewarding for both of us. As long as we’re able, we will volunteer as we are.

The agenda for today? The dogs were naughty, tearing open a trash bag full of some decorations. Floral picks I used on a tree, red plastic grapes, giant pinecones, all scattered through the family room. It’s a mess. Girls! I need to clean that up later. I also have some boxes to sort through so all of like items are together and labelled before they go on the shelves. It’s coming along nicely.

I need to return my Jury Panel Questionnaire. On one hand, I hope to be chosen. It’s fascinatinig to be on a jury. It changed my life in 1981. That story will be in my book, The Freeing of Katie Fitzgibbons, which is my WIP (work in progress). There are so many heartbreaking, wild, difficult, mind-numbing events over my own life, some of them are the basis for what Katie experiences and grows from. Each event she experiences is from life – not necessarily mine – and have happened to real people. Some of the people she learned the hardest life lessons from are a patchwork for some of the characters. Despite everything, she remains a loving person, a believer in God, and a person of strong faith. She always knew God was leading her the way she went.

I love this new shirt. It has a plethora of snowflakes on it, at the boarders of the sleeves and bottom. It’s part of my smaller sized collection I’ve bought since losing 40 pounds on KETO. Time to get back in the saddle, boys and girls. I’m going to be doing raw veggies, protein, salads, and the one Halo Top Sea Salt Caramel Keto Pop. They’re heavenly! They’re expensive, but worth it, I believe. If you know me at all, you know I have a love of all things ice cream. Since I was a kid, it always represented fun, delicious times. That is a story for another day.

As we both make progress with our day and intentions, let’s be safe out there. Let’s be careful out there. See you tomorrow.

Karen Carpenter’s Song, “Rainy Days and Mondays Always Get Me Down,” is a song I think of when’s it’s a rainy Monday. Considering her very sad demise, her death from Anorexia in 1983. We knew little about Anorexia, it’s not a surprise she would sing such a mournful song. For many years, they stigmatized it, along with Bulimia, which is another eating disorder. For years and years this illness went on until she succumbed to it in February 1983. Very sad. And even more sad the more details emerged. I imagine every rainy day and every Monday got her down. Depression was also little talked about illness. I’m glad we’re coming out of the dark ages about such things. It’s something to be grateful for, despite it being gloomy outside.

That said, it’s a beautiful day outside. The sky is of November gloom, like before a snow blows into the heartland. It bothers me, not one bit. I’ve lived here all my life, and the seasons are part of the landscape, so to speak. It’s home. I love the changes.

Yesterday, I was Keto baking like a crazy woman! (Ask the Babe!) I Baked Fluffy Bread, Blueberry Muffins, Blueberry-Almond bagels, and they were fabulous. Lexie stole a couple muffins, gulping them down before making it to the bedroom. There was only a scrap of the foil baking cup left. They were that good, actually. It just makes me laugh. She avoided me for a bit after that. We had a muffin for breakfast, with an Egg Bake Casserole loaded with cheese. It was delicious. I am not hungry a bit.

One thing you notice immediately is the portions are normal size. Americans went to Jumbo Sized food portions and citizens long ago. I’m as guilty as anyone for eating the wrong things. A month ago, it just clicked. I wanted to do something different in the eating and feeling department. So far, don’t feel as tired, but the Jury is still out on that. Age could be a factor, too. I’ve lost about ten pounds, the Babe a little over five. I expect he’ll overtake me soon. Men can lose faster. With the messed up spine I have it’s very difficult to walk for exercise. Many programs are too jarring. My challenge is the working out. Water therapy with warm water is great, but my skin breaks out from the sulfa they used to use. Allergic.

I was feeling all proud and domestic when I poured another cup of coffee while the Babe was in the shower. Then I realized I hadn’t put the egg casserole in the oven yet. Silly me! It was worth waiting for. The Babe takes things like that in stride, not upset in the least he left the house later than he wanted. Folks I have known in my life fly off the handle at goof-ups like that. When you’re retired, things shouldn’t get under your skin.

At any rate, we’re back on track with the day starting thirty minutes later than expected. It was worth the wait. It’s a good day to curl up and write some chapters, and hope to do that. Thinking of doing tomorrow’s blog later tonight. Isn’t there some NFL game on again tonight? So I can be present yet still working. I decided awhile ago when we learned the Babe be borrowing time with his Agent Orange exposure and Ischemic heart disease. Nothing will keep me from spending as much time as I can with him while he’s right here. Period. I’m not being morose, just realistic. I try hard to give myself little to regret. It’s just better that way. Took a long time to learn that. We just enjoy sitting in the same room together, even in silence. It’s very intimate.

We have a little reading and writing to do this afternoon. Lexie is on guard, looking out the studio office window. No intruders will break the perimeter without the sentry alerting us. Bless her over-protective heart. Goldie checks the other rooms, comes to report and get ear rubs, and plops on an extra office chair mat. All is well at Raabe Ranch. Hope it is with you, too. Be Safe. Be Kind. Let’s all be friends and family again. See you tomorrow.